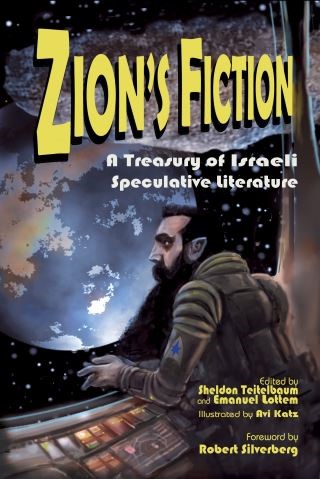 A Treasury of Israeli Speculative Literature

This anthology showcases the best Israeli science fiction and fantasy literature published since the 1980s. The stories included come from Hebrew, Russian, and English-language sources, and include well-known authors such as Shimon Adaf, Pesach (Pavel) Amnuel, Gail Hareven, Savyon Liebrecht, Nava Semel and Lavie Tidhar, as well as a hot-list of newly translated Israeli writers. The book features: an historical and contemporary survey of Israeli science fiction and fantasy literature by the editors; a foreword by revered SF/F writer Robert Silverberg,; an afterword by Dr. Aharon Hauptman, the founding editor of Fantasia 2000, Israel’s seminal SF/F magazine; an author biography for each story included in the volume; and illustrations for each story by award winning American-born Israeli srtist, Avi Katz.

“Zion’s Fiction will supply a distinctive bright line to the spectrum of futuristic fiction, which stands in sore need of broadening, in the cause of promoting cross-cultural understanding as well as showcasing exciting new talent.”– Brian Stableford, author of over 70 novels and renowned SF historian

“Zion’s Fiction explores the unlimited dreams of a people who have learned to stand on shifting ground. To face a future filled with danger and hope, forging into territory that can only be surveyed with the lamp of imagination on our brows.”– David Brin, multiple Hugo and Nebula award-author of EARTH and Existence

“When my collection Wandering Stars: An Anthology of Jewish Fantasy and Science Fiction was published in 1974,[It] became a classic. And now…we have the first ever anthology in the entire universe of Israeli fantasy and science fiction: Zion’s Fiction…Go forth and read…and may you find Zion’s Fiction unexpected, delightful, and delirious!” –Jack Dann, award winning author and editor of over 75 books including The Memory Cathedral and The Silent

“The basic joy in science fiction and fantasy is the chance to look inside minds different from your own. Here’s your chance. Some bright minds in the nation of Israel have been exercising their imaginations, sharing their different dreams and nightmares, and the results are ours to enjoy.” – Larry Niven, a multiple Hugo and Nebula Award-winning author of the Ringworld Series

Sheldon Teitelbaum, an award-winning Los Angeles-based Canadian/American/Israeli writer, and former member of the Editorial Board of Fantasia 2000, is a longtime commentator on Jewish and Israeli science fiction and fantasy literature who has published widely in the Los Angeles Times, Cinefantastique, The Jerusalem Report, Foundation: The Review of Science Fiction, and The Encyclopedia of Science Fiction

Emanuel Lottem, a central figure in Israeli science fiction and fantasy scene and former member of the Editorial Board of Fantasia 2000, is the translator and editor of some of the best SF/F books published in Hebrew, and a moving force in the creation of the Israeli Society for Science Fiction and Fantasy.

Avi Katz, an award-winning American-born Israeli illustrator, cartoonist, and painter, is the staff illustrator of Jerusalem Report magazine. He has illustrated over 170 books in Israel and the United States.