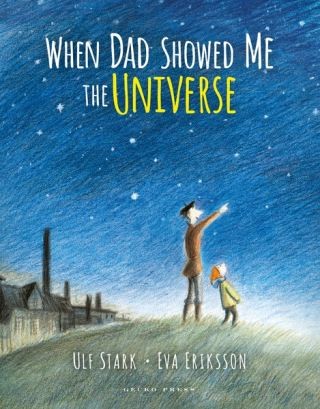 When Dad Showed Me the Universe

Tonight Dad wants to show Ulf something very special: the universe. Of course, they can't possibly embark on such a daring adventure unprepared, so they wrap up warm, gather provisions, and then off they go. It's a long walk, but eventually they get there. Along the way, they learn that sometimes the journey is more important than the destination, and sometimes the biggest lessons happen when you least expect them.

Ulf Stark is one of the world's great writers. Author of over 30 books for children and young adults, he has won many prizes, including the German Youth Literature Prize and the Astrid Lindgren Prize. He was shortlisted for the Hans Christian Andersen Award in 2018.

Eva Eriksson is one of the world's great illustrators. Her awards include the Astrid Lindgren Prize and the August Award and she is consistently nominated for the Hans Christian Andersen Award.