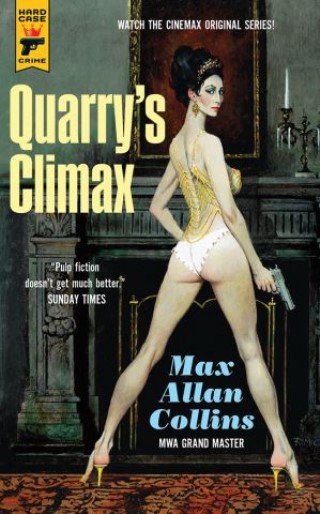 From the award-winning author of ROAD TO PERDITION, the new QUARRY novel continues the deadly story of the assassin who stars in the acclaimed Cinemax original series


Memphis, 1975. “Raunchy” doesn’t begin to describe Max Climer’s magazine, Climax, or his all-hours strip club, or his planned video empire. And evangelists, feminists, and local watchdog groups all want him out of business. But someone wants more than that, and has hired a killer to end Max’s career permanently. Only another hit man – the ruthless professional known as Quarry, star of the acclaimed series on Cinemax – can keep Climer from becoming a casualty in the Sexual Revolution.

Max Allan Collins: Max Allan Collins is the author of Road to Perdition, the acclaimed graphic novel that inspired the movie, and of the multiple-award-winning Nathan Heller series of historical hardboiled mysteries. Max Allan Collins is one of most prolific and popular authors working in the field today. He was chosen as a 2017 Grand Master by the Mystery Writers of America.  He is also the literary executor of Mickey Spillane.