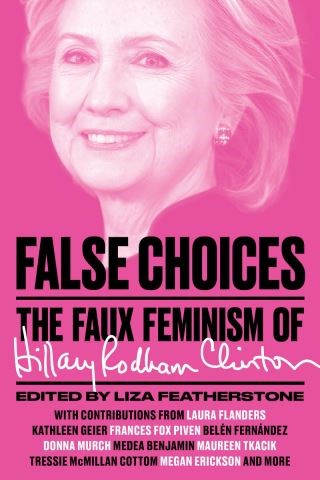 Hillary Rodham Clinton is one of the most powerful women in world politics, and the irrational right-wing hatred of Clinton has fed her progressive appeal, helping turn her into a feminist icon. To get a woman in the White House, it’s thought, would be an achievement for all women everywhere, a kind of trickle-down feminism.

In the run-up to the 2016 presidential election, the mantle of feminist elect has descended on Hillary Clinton, as a thousand viral memes applaud her, and most mainstream feminist leaders, thinkers, and organizations endorse her. In this atmosphere, dissent seems tantamount to political betrayal.

In False Choices, an all-star lineup of feminists contests this simplistic reading of the candidate. A detailed look at Hillary Clinton’s track record on welfare, Wall Street, criminal justice, education, and war reveals that she has advanced laws and policies that have done real harm to the lives of women and children across the country and the globe. This well-researched collection of essays restores to feminism its revolutionary meaning, and outlines how it could transform the United States and its relation to the world.

Liza Featherstone: Liza Featherstone writes often about feminism and economic justice. She is a contributing writer to the Nation and the magazine’s first-ever advice columnist. Also a columnist for amNY, Featherstone has published in many national publications including the New York Times, the Washington Post, Ms., Glamour, Teen Vogue, and the Women’s Review of Books. She is the author of Selling Women Short: The Landmark Battle for Workers’ Rights at Wal-Mart and is finishing a history of the focus group. She teaches journalism at both New York University and Columbia’s School of International and Public Affairs.