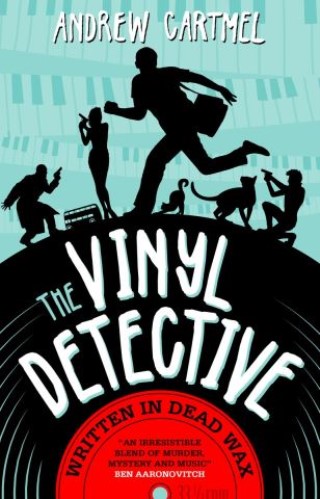 He is a record collector — a connoisseur of vinyl, hunting out rare and elusive LPs. His business card describes him as the “Vinyl Detective” and some people take this more literally than others.

Like the beautiful, mysterious woman who wants to pay him a large sum of money to find a priceless lost recording — on behalf of an extremely wealthy (and rather sinister) shadowy client.

Given that he’s just about to run out of cat biscuits, this gets our hero’s full attention. So begins a painful and dangerous odyssey in search of the rarest jazz record of them all…

Andrew Cartmel: Andrew Cartmel is a novelist and screenwriter. His work for television includes Midsomer Murders and Torchwood, and a legendary stint as Script Editor on Doctor Who. He has also written plays for the London Fringe, toured as a stand-up comedian, and is currently co-writing with Ben Aaronovitch a series of comics based on the bestselling Rivers of London books. He lives in London.