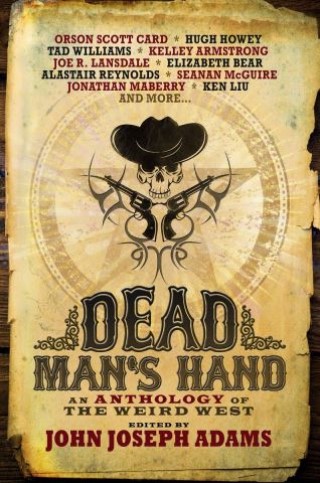 Dead Man's Hand: An Anthology of the Weird West

HOW THE WEST WAS WEIRD!

From a kill-or-be-killed gunfight with a vampire to an encounter in a steampunk bordello, the weird western is a dark, gritty tale where the protagonist might be playing poker with a sorcerous deck of cards, or facing an alien on the streets of a dusty frontier town.

Here are twenty-three original tales—stories of the Old West infused with elements of the fantastic—produced specifically for this volume by many of today’s finest writers. Included are Orson Scott Card’s first “Alvin Maker” story in a decade, and an original adventure by Fred Van Lente, writer of Cowboys & Aliens.

John Joseph Adams: Editor John Joseph Adams (www.johnjosephadams.com) - called "the reigning king of the anthology world" by Barnes & Noble.com - is the bestselling editor of many anthologies such as Epic: Legends of Fantasy, Wastelands, The Living Dead, By Blood We Live, Oz Reimagined, Federations, and The Improbable Adventures of Sherlock Holmes. He the editor of Fantasy Magazine and Lightspeed Magazine, which published two Nebula Award finalists and a Hugo Award finalist in its first year. John co-hosts Wired.com's The Geek's Guide to the Galaxy podcast.