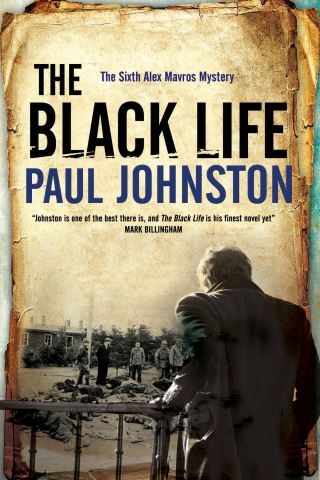 A novel of Jewish collaborators in the Holocaust

The story is told in alternating chapters, a narrative set in the present day and also a first person harrowing account of the persecution of the Holocaust years. Whilst it is an indictment of the wartime collaboration and subsequent profiteering to which many countries turned a blind eye, and whilst it also underlines the extent of anti-Semitism still existing in Greece and elsewhere today, the novel also contains accounts of working life in the concentration camps and how survival of some Jews might depend on their working for the SS and even sending one’s own family members to their deaths in the gas chambers.

This is the latest outing for half-Greek, half-Scottish Private Investigator, Alex Mavros – but this is really only a vehicle for the author’s most far-reaching and ambitious novel to date.

The gripping dual narrative that follows provides readers with a fresh perspective into what makes Greece – that most volatile and fascinating of countries - tick, as well as shocking new insights into the atrocities of the Second World War and into what makes a man into a killer without conscience and guilt. If readers think they know all there is to know about the Holocaust, they should read Paul Johnston’s The Black Life – and think again.

This is a harrowing read. The Black Life is the most moving work yet from an experienced, award-winning writer.

Paul Johnston: Born and brought up in Edinburgh, Paul Johnston studied ancient and modern Greek at Oxford and now divides his time between Scotland and Greece. As well as four previous Alex Mavros novels, he is the author of the award-winning Quint and Matt Wells crime series.