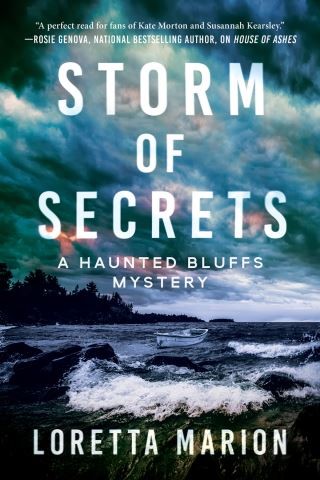 A deadly storm, a missing three-year-old child, a grisly murder, and the eerie presence of the spirits of the dead set the stage for the second mesmerizing installment of Loretta Marion's paranormal suspense series.

A powerful storm descends upon Cape Cod's Whale Rock at the peak of tourist season--and the weekend Cassandra Mitchell's and Daniel Benjamin's wedding is set to take place at The Bluffs, the magnificent Victorian mansion Cassie inherited from her family. In the wake of the storm's destruction, three-year-old Lucas Kleister goes missing--and the body of small-time drug dealer Lee Chambers is found in a restaurant dumpster. Now, the WRPD are faced with a murder to solve, a missing child to find, and the aftermath of one of the worst storms in recent memory.

While aiding with the clean-up and helping the displaced, Cassie has been receiving cryptic messages from the spirits of her great-grandparents, Percy and Celeste Mitchell, the original residents of The Bluffs. At first, the messages are benign, but soon, they begin to point to something more sinister. As Cassie works to decipher their meaning, the specter of a mysterious local legend surfaces. The tale of Barnacle Boy--and what happened to him during another destructive storm decades earlier--will weave through the desperate search to find Lucas and the identity of the killer.

Loretta Marion: A true bibliophile, Loretta Marion's affection for the written word began in childhood and followed her like a shadow throughout her life as she crafted award winning marketing and advertising copy and educational brochures. When not whipping out words on her laptop, she is traveling, enjoying outdoor pursuits, or is curled up with a delicious new book. Loretta lives in Rhode Island with her husband, Geoffrey, and their beloved Mr. Peabody, a sweet, devoted and amusing "Corgador" (Corgi-Labrador cross).