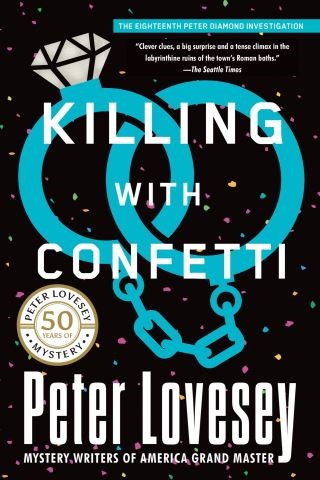 As a New Year begins in Bath, Ben Brace proposes to his long-term girlfriend, Caroline, the daughter of notorious crime baron Joe Irving, who is coming to the end of a prison sentence. The problem is that Ben’s father, George, is the Deputy Chief Constable. A more uncomfortable set of in-laws would be hard to imagine. But mothers and sons are a formidable force: a wedding in the Abbey and reception in the Roman Baths are arranged before the career-obsessed DCC can step in.

Peter Diamond, Bath’s head of CID, is appalled to be put in charge of security on the day. Ordered to be discreet, he packs a gun and a guest list in his best suit and must somehow cope with potential killers, gang rivals, warring parents, bossy photographers and straying bridesmaids. The laid-back Joe Irving seems oblivious to the danger he is in from rival gang leaders, while Brace can’t wait for the day to end. Will the photo session be a literal shoot? Will Joe Irving’s speech as father of the bride be his last words? Can Diamond pull off a miracle, avert a tragedy and send the happy couple on their honeymoon?

Peter Lovesey: Peter Lovesey is the author of more than thirty highly praised mystery novels. He has been named a Grand Master by the Mystery Writers of America and has been awarded the CWA Gold and Silver Daggers, the Cartier Diamond Dagger for Lifetime Achievement, the Strand Magazine Award for Lifetime Achievement, the Macavity, Barry, and Anthony Awards, and many other honors. He lives in Shrewsbury, England.