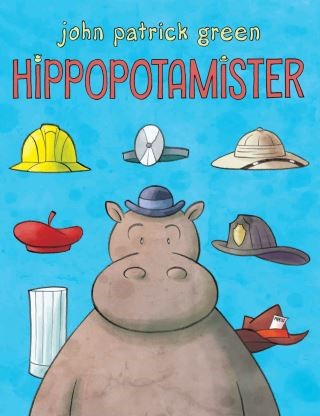 The zoo isn't what it used to be. It's run down, and Hippo hardly ever gets any visitors. So he decides to set off for the outside with his friend Red Panda. To make it in the human world, Hippo will have to become a Hippopotamister: he'll have to act like a human, get a job, and wear a hat as a disguise. He's a good employee, whether he's a construction worker, a hair stylist, or a sous chef. But what he really needs is a job where he can be himself.

John Patrick Green: John Patrick Green grew up on Long Island and has worked in New York City since graduating from the School of Visual Arts with a degree in graphic design. He was the comics consultant for Disney Adventures magazine, where he wrote and often drew the popular Last Laugh feature. John is the co-creator and illustrator of the graphic novel series Jax Epoch and the Quicken Forbidden and Teen Boat!, both with writer Dave Roman. He has also worked as a writer, illustrator, or designer on comics and graphic novels for Nickelodeon Magazine, DreamWorks, Scholastic Graphix, and DC Comics. John lives in Brooklyn with zero cats and way too many LEGOs.