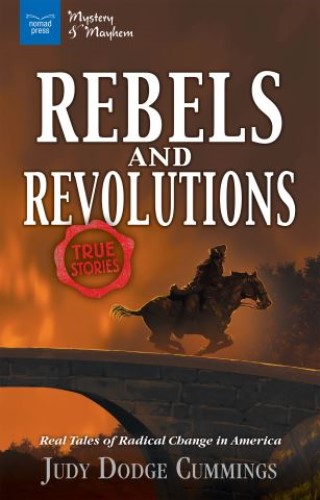 What do you do when you see injustice unfolding? Do you stand and fight? People who do are often called traitors, agitators or rabble-rousers. These are the people who are often the driving force toward change.

Throughout American history, people who worked to radically change society have been criticized, arrested, and even killed. Rebels and Revolutions: Real tales of Radical Change in America for ages 9 to 12 explores the lives of five firebrands who used muskets and marches, boycotts and lawsuits in their struggle for justice. When he was only 15 years old, Joseph Plumb Martin committed treason when he joined the Continental Army to fight for American independence. What did this teenager feel so strongly about that he was willing to break the law?

Sengbe Pieh’s fight for freedom took him from the bowels of a slave ship to the nation’s highest court. In 1944, the U.S. government began drafting people being held in military camps to fight in World War II. A group called the Fair Play Committee refused until their families were allowed to return to their homes. In the days of the segregated south, Claudette Colvin was denied the most basic rights because of her black skin. One day, this teenager refused to relinquish her seat on the bus to a white woman. After a childhood of toiling in California’s fruit and vegetable fields, Cesar Chavez challenged the power of the agricultural industry. He became a voice of hope for thousands of poor migrant workers. Young readers will be inspired by these five rebels who refused to accept the status quo. They acted boldly, provoked change, and fundamentally changed American history. Rebels and Revolutions: Real tales of Radical Change in America is the fifth book in a series called Mystery & Mayhem, which features true tales that whet kids’ appetites for history by engaging them in genres with proven track records—mystery and adventure.

History is made of near misses, unexplained disappearances, unsolved mysteries, and bizarre events that are almost too weird to be true—almost! The Mystery and Mayhem series delves into these tidbits of history to provide kids with a jumping off point into a lifelong habit of appreciating history. Each of the five true tales told within Rebels and Revolutions are paired with further fun facts about the setting, industry, and time period. A glossary and resources page provide the opportunity to practice using essential academic tools. These nonfiction narratives use clear, concise language with compelling plots that both avid and reluctant readers will be drawn to.

Judy Dodge Cummings: Judy Dodge Cummings is a writer and former history teacher from Reedsburg, Wisconsin. She has an MFA in Creative Writing for Children and Teens from Hamline University. She has written several books for the educational market. Some of her titles include The Underground Railroad: Navigate the Journey from Slavery to Freedom (Nomad Press, March 14, 2017); Civil War Leaders (Essential Library, August 15, 2016); The Emancipation Proclamation (Essential Library, August 15, 2016); and The American Revolution: Experience the Battle for Independence (Nomad Press, March 2015).