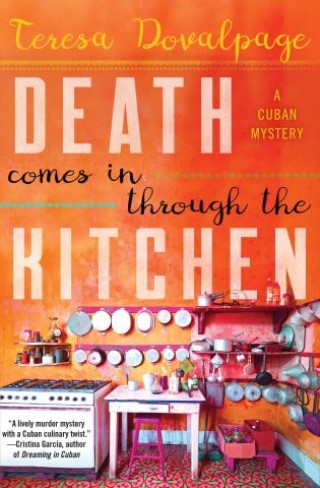 Death Comes in through the Kitchen

Don’t let the authentic Cuban recipes fool you: This is no cozy mystery. Set in Havana during the Black Spring of 2003, a charming but poison-laced culinary mystery reveals the darker side of the modern Revolution.

Matt, a San Diego journalist, arrives in Havana to marry his girlfriend, Yarmila, a 24-year-old Cuban woman whom he first met through her food blog. But Yarmi isn’t there to meet him at the airport, and when he hitches a ride to her apartment, he finds her lying dead in the bathtub.

With Yarmi’s murder, lovelorn Matt is immediately embroiled in a Cuban adventure he didn’t bargain for. The police and secret service have him down as their main suspect, and in an effort to clear his name, he must embark on his own investigation into what really happened. The more Matt learns about his erstwhile fiancée, though, the more he realizes he had no idea who she was at all—but did anyone?

Teresa Dovalpage: Teresa Dovalpage was born in Havana, Cuba, in 1966. She earned her BA in English  literature and an MA in Spanish literature at the University of Havana, and her PhD in Latin American literature at the University of New Mexico. She is the author of twelve other works of fiction and three plays, and is the winner of the Rincón de la Victoria Award and a finalist for the Herralde Award. She lives in New Mexico.