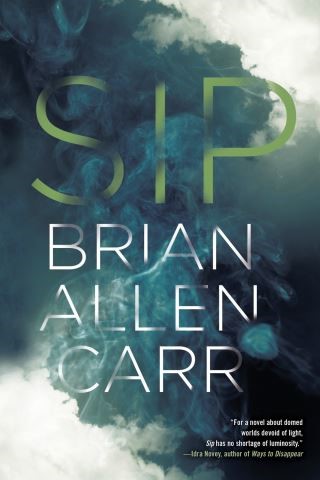 A lyrical, apocalyptic debut novel about addiction, friendship, and the struggle for survival at the height of an epidemic.

The sickness started with a single child and quickly spread: you could get high by drinking your own shadow. Artificial lights were destroyed so addicts could sip shadow at night in the pure moonlight. Gangs of shadow addicts chased down children on playgrounds, rounded up old ladies from retirement homes. Cities were destroyed and governments fell. And if your shadow was sipped entirely, you became one of them, had to drink the shadows of others or go mad.

One hundred and fifty years later, what’s left of the world is divided between the highly regimented life of those inside dome cities who are protected from natural light (and natural shadows), and those forced to the dangerous, hardscrabble life in the wilds outside. In rural Texas, Mira, her shadow-addicted-friend Murk, and an ex-domer named Bale search for a possible mythological cure to the shadow sickness—but they must find it, it is said, before the return of Halley’s Comet, which is only days away.

Brian Allen Carr: Brian Allen Carr splits his time between Indiana and Texas. He is the winner of a Wonderland Book Award and Texas Observer Story Prize. His short fiction has appeared in Ninth Letter, Hobart, Boulevard and others publications. Sip is his first novel.