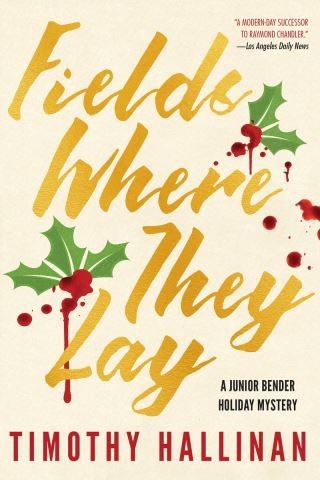 Fields Where They Lay

It’s three days until Christmas and Junior Bender, Hollywood’s fasttalking fixer for the felonious, is up to his ears in shopping mall Santas, Russian mobsters, desperate holiday shoppers, and (’tis the season) murder.

The halls are decked, the deck is stacked, and here comes that jolly old elf. Junior Bender, divorced father of one and burglar extraordinaire, finds himself stuck inside the Edgerton Mall, and not just as a last-minute shopper (though he is that too). Edgerton isn’t exactly the epicenter of holiday cheer, despite its two Santas, canned Christmas music, chintzy bows, and festive lights. The mall is a fossil of an industry in decline; many of its stores are closed, and to make matters worse, there is a rampant shoplifting problem.

The murderous Russian mobster who owns the place has decided it takes a thief to catch a thief and hires Junior—under threat—to solve the shoplifting problem for him. But Junior’s surveillance operation doesn’t go well: as Christmas Eve approaches, two people are dead and it’s obvious that shoplifting is the least of the mall’s problems. To prevent further deaths, possibly including his own, Junior must confront his dread of Christmas—both present and past.

Timothy Hallinan: Timothy Hallinan has been nominated for the Edgar, Nero, Shamus, Macavity, and Silver Dagger awards. He is the author of twenty widely praised books, including the Poke Rafferty Bangkok thrillers, most recently Fools’ River, and the Junior Bender Hollywood burglar mysteries, including Herbie’s Game, winner of the Lefty Award for Best Humorous Mystery. After years of working in the television and music industries, he now writes full-time. He lives in California and Thailand.