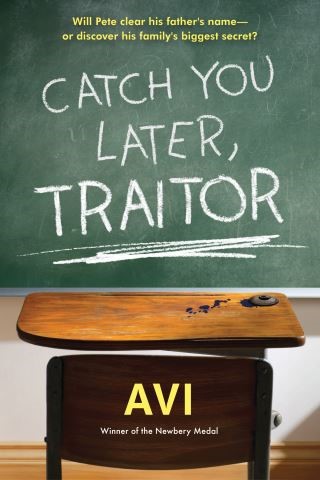 From Newbery Medalist Avi comes the thrilling and suspenseful story of an ordinary American family who falls under suspicion during the 1950s Red Scare.

It’s 1951, and twelve-year-old Pete Collison is a regular kid who loves detective stories and radio crime dramas. When an FBI agent shows up at Pete’s doorstep, accusing Pete’s father of being a Communist, Pete is caught in a real-life mystery. Could there really be Commies in his family?

PRAISE FOR CATCH YOU LATER, TRAITOR:

“Suspenseful . . .  Authentic period details--such as popular radio programs and the ongoing rivalry between the Dodgers and the Giants--add a colorful backdrop to Pete’s quest as he navigates the murky gray area between truth and fiction. An excellent introduction to the frenzy of the McCarthy era.” —Publishers Weekly, starred review

"Avi, a master of historical fiction, vividly recreates not only the neighborhoods and pop culture of period Brooklyn, but the runaway paranoia that dominated daily life in the early years of the Cold War. With each clue Pete uncovers, the tension picks up, engaging readers in solving the dual mystery of his father’s past and identifying his accuser whose name is kept a well-concealed surprise until the last moment . . . As a mystery, historical fiction, and love letter to 1950s Brooklyn, this novel succeeds on every level." —School Library Journal, starred review

“Avi’s tale of one Brooklyn family living in a time of intolerance effectively explores the natures of suspicion, loyalty, and freedom, following a young protagonist who comes to learn the importance of freedom of speech and ‘staying true to your own thoughts.’” —The Horn Book Magazine

“An involving, twisty mystery, grounded by the palpable emotional threat of Pete’s father being taken away. An accomplished historical mystery by one of kid lit’s most reliable craftspeople.” —Booklist

“Thought-provoking . . . Avi builds Pete’s story, told in the first person, with page-turning tension and memorable characters that will leave readers with a strong sense of the insidious power wielded by the FBI and McCarthyites.” —Kirkus Reviews

Avi:
Avi is the author of the Newbery Medal novel Crispin: The Cross of Lead and the Newbery Honor books Nothing But the Truth and The True Confessions of Charlotte Doyle, among many other books for young readers. Catch You Later, Traitor was inspired by his own childhood in Brooklyn during the Red Scare. Avi now lives in Colorado. You can visit him online at www.avi-writer.com.