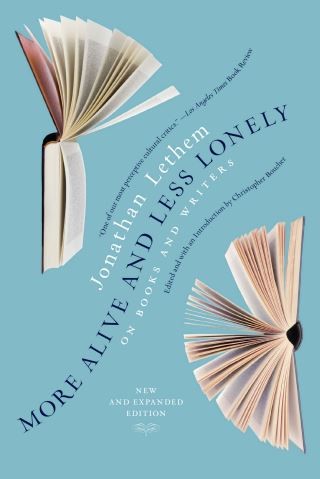 On Books and Writers

More Alive and Less Lonely collects over a decade of Jonathan Lethem’s finest writing on writing, with new and previously unpublished material, including: impassioned appreciations of forgotten writers and overlooked books, razor-sharp critical essays, and personal accounts of his most extraordinary literary encounters and discoveries.

Only Lethem, with his love of cult favorites and the canon alike, can write with equal insight into classic writers like Charles Dickens and Herman Melville, modern masters like Lorrie Moore and Thomas Pynchon, graphic novelist Chester Brown, and science fiction outlier Philip K. Dick.

Sharing his infectious love for books of all kinds, More Alive and Less Lonely is a bracing voyage of literary discovery and an essential addition to every booklover’s shelf.

Jonathan Lethem: JONATHAN LETHEM is the New York Times bestselling author of nine novels, including Dissident Gardens, The Fortress of Solitude, and Motherless Brooklyn; three short story collections; and two essay collections, including The Ecstasy of Influence, which was a National Book Critics Circle Award finalist. A recipient of the MacArthur Fellowship and winner of the National Book Critics Circle Award for Fiction, Lethem’s work has appeared in The New Yorker, Harper’s Magazine, Rolling Stone, Esquire, and The New York Times, among other publications.

Editor CHRISTOPHER BOUCHER is a professor of English at Boston College, editor of Post Road magazine, and author of the novels How to Keep Your Volkswagen Alive and Golden Delicious, both from Melville House.