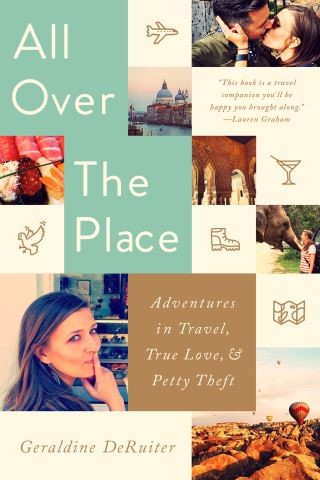 All Over the Place

Some people are meant to travel the globe, to unwrap its secrets and share them with the world. And some people have no sense of direction, are terrified of pigeons, and get motion sickness from tying their shoes. These people are meant to stay home and eat nachos.
Geraldine DeRuiter is the latter. But she won't let that stop her.
Hilarious, irreverent, and heartfelt, All Over the Place chronicles the years Geraldine spent traveling the world after getting laid off from a job she loved. Those years taught her a great number of things, though the ability to read a map was not one of them. She has only a vague idea of where Russia is, but she now understands her Russian father better than ever before. She learned that what she thought was her mother's functional insanity was actually an equally incurable condition called "being Italian." She learned what it's like to travel the world with someone you already know and love--how that person can help you make sense of things and make far-off places feel like home. She learned about unemployment and brain tumors, lost luggage and lost opportunities, and just getting lost in countless terminals and cabs and hotel lobbies across the globe. And she learned that sometimes you can find yourself exactly where you need to be--even if you aren't quite sure where you are.