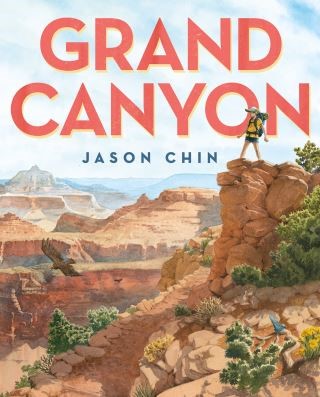 Rivers wind through earth, cutting down and eroding the soil for millions of years, creating a cavity in the ground 277 miles long, 18 miles wide, and more than a mile deep known as the Grand Canyon.

Home to an astonishing variety of plants and animals that have lived and evolved within its walls for millennia, the Grand Canyon is much more than just a hole in the ground. Follow a father and daughter as they make their way through the cavernous wonder, discovering life both present and past.

Weave in and out of time as perfectly placed die cuts show you that a fossil today was a creature much long ago, perhaps in a completely different environment. Complete with a spectacular double gatefold, an intricate map and extensive back matter.

Jason Chin: Jason Chin is the award-winning author of Redwoods, Coral Reefs, and Island: A Story of the Galápagos, which was named a 2012 Best Book of the Year by School Library Journal and Kirkus Reviews. His book, Gravity, received three starred reviews, while Water Is Water received two starred reviews. Jason lives with his wife, Deirdre Gill, and their two children in Burlington, Vermont.