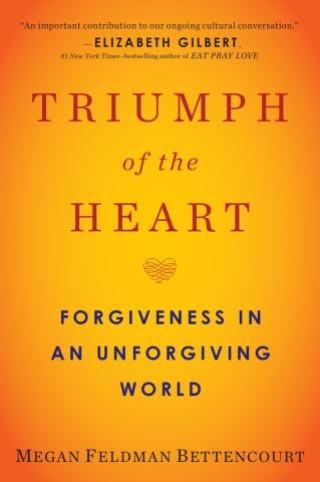 Triumph of the Heart

Forgiveness in an Unforgiving World

When Megan Feldman Bettencourt found herself embittered after a breakup and a string of professional setbacks, she met an extraordinary man named Azim. Azim had forgiven the man who killed his beloved only son, and even reached out to the killer’s family.  He truly seemed to be at peace.

Triumph of the Heart is the story of Megan’s quest to understand this complex concept, from both a scientific perspective and a human one. She draws on cutting-edge research showing that forgiveness can provide a range of health benefits, from relieving depression to decreasing high blood pressure. She examines situations as mundane as road rage, as painful as cheating spouses, and as unthinkable as war crimes. Through stories of people and even communities who have forgiven in the toughest of circumstances, she shows us how they’re able to do it, the profound sense of freedom they feel afterward, and the evocative implications for peacemaking worldwide.

This journey takes Megan from recovered addicts who restarted their lives by seeking forgiveness, to a Baltimore principal who used forgiveness techniques to eradicate violence in her school, to genocide survivors in Rwanda who forgave the people who killed their families and perpetrators who are still trying to redeem themselves.

Along the way, Megan strengthens her own powers of forgiveness, altering her life in ways she never expected. With grace and compassion, she reveals that our human capacity for forgiveness not only makes us healthier and happier, but is the key to healing, growing, and living well.

Megan Feldman Bettencourt is an award-winning journalist whose work has appeared in magazines such as Glamour, Details, and Southwest: The Magazine, and in newspapers including Newsday and the Dallas Observer.

She began her career as a Central America-based freelancer and holds a master’s degree from the Columbia University Graduate School of Journalism in New York. She lives in Denver with her husband and son.