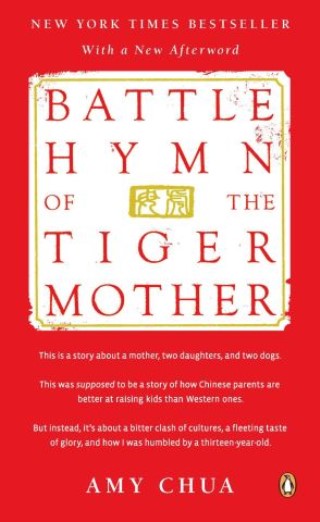 Battle Hymn of the Tiger Mother

“Few have the guts to parent in public. Amy [Chua]'s memoir is brutally honest, and her willingness to share her struggles is a gift. Whether or not you agree with her priorities and approach, she should be applauded for raising these issues with a thoughtful, humorous and authentic voice.” —Time Magazine

“[A] riveting read… Chua's story is far more complicated and interesting than what you've heard to date -- and well worth picking up… I guarantee that if you read the book, there'll undoubtedly be places where you'll cringe in recognition, and others where you'll tear up in empathy.” —San Francisco Chronicle

“Battle Hymn of the Tiger Mother hit the parenting hot button, but also a lot more, including people's complicated feelings about ambition, intellectualism, high culture, the Ivy League, strong women and America's standing in a world where China is ascendant. Chua's conviction that hard work leads to inner confidence is a resonant one.”—Chicago Tribune

“Readers will alternately gasp at and empathize with Chua's struggles and aspirations, all the while enjoying her writing, which, like her kid-rearing philosophy, is brisk, lively and no-holds-barred. This memoir raises intriguing, sometimes uncomfortable questions about love, pride, ambition, achievement and self-worth that will resonate among success-obsessed parents… Readers of all stripes will respond to [Battle Hymn of the] Tiger Mother.”—The Washington Post

Amy Chua: Amy Chua is the John M. Duff Professor of Law at Yale Law School. Her most recent book is Political Tribes: Group Instinct and the Fate of Nations. She is also the author of The Triple Package: How Three Unlikely Traits Explain the Rise and Fall of Cultural Groups in America (co-authored with Jed Rubenfeld). Chua's first book, World on Fire, was a New York Times bestseller and selected by The Economist as one of the best books of 2003; while her second book, Day of Empire, was a critically acclaimed Foreign Affairs bestseller. Chua lives with her husband, two daughters, and two Samoyeds in New Haven, Connecticut.