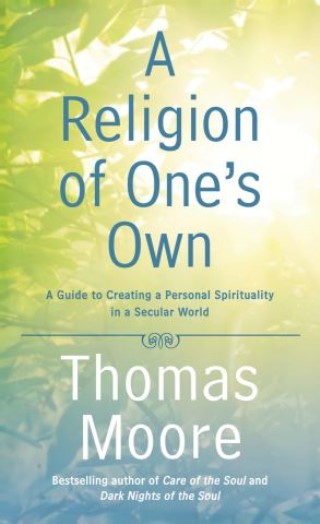 A Religion of One's Own

A Guide to Creating a Personal Spirituality in a Secular World

The New York Times bestselling author and trusted spiritual adviser offers a follow-up to his classic Care of the Soul.

Something essential is missing from modern life. Many who’ve turned away from religious institutions—and others who have lived wholly without religion—hunger for more than what contemporary secular life has to offer but are reluctant to follow organized religion’s strict and often inflexible path to spirituality. In A Religion of One’s Own, bestselling author and former monk Thomas Moore explores the myriad possibilities of creating a personal spiritual style, either inside or outside formal religion.

Two decades ago, Moore’s Care of the Soul touched a chord with millions of readers yearning to integrate spirituality into their everyday lives. In A Religion of One’s Own, Moore expands on the topics he first explored shortly after leaving the monastery. He recounts the benefits of contemplative living that he learned during his twelve years as a monk but also the more original and imaginative spirituality that he later developed and embraced in his secular life. Here, he shares stories of others who are creating their own path: a former football player now on a spiritual quest with the Pueblo Indians, a friend who makes a meditative practice of floral arrangements, and a well-known classical pianist whose audiences sometimes describe having a mystical experience while listening to her performances. Moore weaves their experiences with the wisdom of philosophers, writers, and artists who have rejected materialism and infused their secular lives with transcendence.

At a time when so many feel disillusioned with or detached from organized religion yet long for a way to move beyond an exclusively materialistic, rational lifestyle, A Religion of One’s Own points the way to creating an amplified inner life and a world of greater purpose, meaning, and reflection.

Thomas Moore: Thomas Moore was a monk for twelve years, a musician, a university professor, and a psychotherapist. He writes regularly for Psychology Today, The Huffington Post, Spirituality & Health, and Resurgence Magazine. He lectures widely on holistic medicine, spirituality, psychotherapy, and the arts. Moore has been awarded numerous honors, including the Humanitarian Award from Albert Einstein College of Medicine of Yeshiva University and an honorary doctorate from Lesley University. Thomas is the author of eighteen previous books, including Care of the Soul, Soul Mates, and Dark Nights of the Soul. He lives in New Hampshire.