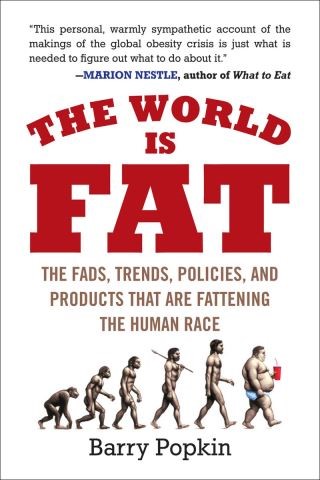 The World Is Fat

The Fads, Trends, Policies, and Products That Are Fatteningthe Human Race

The planet's 1.6 billion overweight people by far outnumber the 700 million who are undernourished. This figure would have seemed ludicrous just fifty years ago. As a result of unprecedented trends in technology, globalization, government policy, and the food industry that are changing how we eat, drink, and move, we now live in a world populated by overweight people with debilitating health problems.

In this fascinating look at the striking changes in both our lifestyles and food system since World War II, Barry Popkin shows how present options for eating and drinking- especially when combined with a dramatic reduction in physical activity-are clashing with millions of years of evolution to fatten the human race. Popkin argues that widespread obesity-and the chronic health problems that contribute to the bulk of deaths in the world-is less a result of poor dietary choices than about a hi-tech, interconnected world in which governments and multinational corporations have extraordinary power to shape our everyday lives.

Barry Popkin: Barry Popkin is the Carla Smith Chamblee Distinguished Professor of Global Nutrition at the University of North Carolina, Chapel Hill, and director of the UNC Interdisciplinary Obesity Center. His U.S. research program focuses on understanding dietary and physical activity behaviors, the factors that cause them to change over time, and their health consequences. His global work includes a series of long-term studies in China, Russia, the Philippines, Brazil, and several other countries. Popkin’s research has been featured in hundreds of newspaper and magazine articles, in such publications as The New York Times, The Wall Street Journal, USA Today, The Economist, Time, and Scientific American.