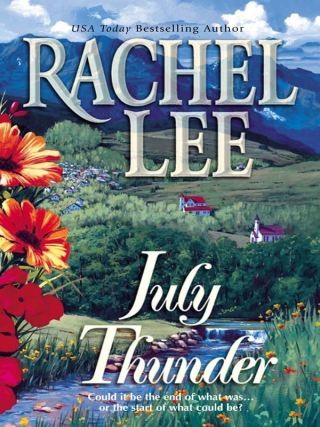 Deputy Sheriff Sam Canfield is a man shouldering too many burdens. He defied his demanding father to become a cop and marry the woman he loved, never for an instant regretting his choice. Then his wife's tragic death left him a shell of the man he once had been.

Schoolteacher Mary McKinney k ows about the pain and regret that haunt Sam. The death of her son seven years ago destroyed her marriage and left her with her own sorrow and guilt. Now she wants—she needs—to free Sam from his demons…to help heal the rift between father and son. But in doing so, she'll put her own vulnerable heart in jeopardy.

It's July in Whisper Creek. And as a blazing wildfire sears the land, the heat of emotion rages through its residents. But when the flames die down, will there be a place left to rebuild lost hopes and dreams?

Rachel Lee: Rachel Lee was hooked on writing by the age of twelve, and practiced her craft as she moved from place to place all over the United States. This New York Times bestselling author now resides in Florida and has the joy of writing full-time.