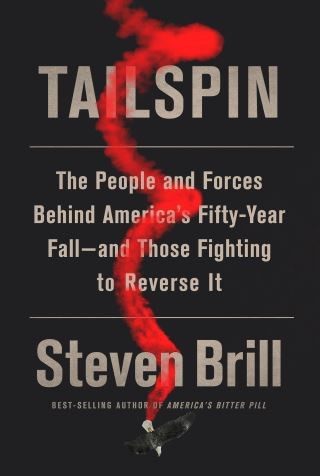 In this revelatory narrative covering the years 1967 to 2017, Steven Brill gives us a stunningly cogent picture of the broken system at the heart of our society. He shows us how, over the last half century, America’s core values—meritocracy, innovation, due process, free speech, and even democracy itself—have somehow managed to power its decline into dysfunction. They have isolated our best and brightest, whose positions at the top have never been more secure or more remote.

The result has been an erosion of responsibility and accountability, an epidemic of shortsightedness, an increasingly hollow economic and political center, and millions of Americans gripped by apathy and hopelessness. By examining the people and forces behind the rise of big-money lobbying, legal and financial engineering, the demise of private-sector unions, and a hamstrung bureaucracy, Brill answers the question on everyone’s mind: How did we end up this way? Finally, he introduces us to those working quietly and effectively to repair the damages. At once a diagnosis of our national ills, a history of their development, and a prescription for a brighter future, Tailspin is a work of riveting journalism—and a welcome antidote to political despair.

Steven Brill: STEVEN BRILL has written for The New Yorker, Time, The New York Times Magazine, Esquire, New York, and Fortune. He founded and ran Court TV, The American Lawyer magazine, ten regional legal newspapers, and Brill's Content magazine. Brill was the author of Time's March 4, 2013, special report "Bitter Pill: Why Medical Bills Are Killing Us," for which he won the 2014 National Magazine Award for Public Interest, and the 2015 bestseller America's Bitter Pill. He has regularly appeared as an expert analyst on NBC, CBS, and CNN. He teaches journalism at Yale, where he founded the Yale Journalism Initiative to enable talented young people to become journalists. In 2018, he cofounded NewsGuard, which rates the legitimacy of online news sites. He lives in New York City.