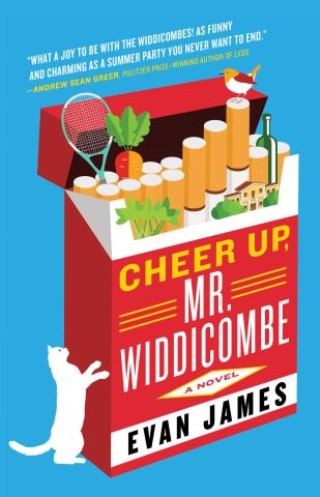 Named one of 2019’s most anticipated reads by Entertainment Weekly, “a hilarious and witty joy of a novel about a family’s insanely dramatic summer at their new island home” (Cosmopolitan) in the Pacific Northwest.

The inimitable—some might say incorrigible—Frank Widdicombe is suffering from a deep depression. Or so his wife, Carol, believes. But Carol is convinced that their new island home—Willowbrook Manor on the Puget Sound—is just the thing to cheer him up. And so begins a whirlwind summer as their house becomes the epicenter of multiple social dramas involving the family, their friends, and a host of new acquaintances.

The Widdicombes’ son, Christopher, is mourning a heartbreak after a year abroad in Italy. Their personal assistant, Michelle, begins a romance with preppy screenwriter Bradford, who also happens to be Frank’s tennis partner. Meanwhile, a local named Marvelous Matthews is hired to create a garden at the manor—and is elated to find Gracie Sloane, bewitching self-help author, in residence as well. When this alternately bumbling and clever cast of characters comes together, they turn “as frothy and bitter as a pot of freshly brewed dark-roast coffee, the kind that’s always available on the Widdicombe’s sideboard. And the dialogue, oh how it singes and sears” (The Washington Post).

Evan James: Evan James is an award-winning writer whose personal essays and fiction have appeared in such publications as Travel + Leisure, Oxford American, and The New York Times, among others. He is the author of Cheer Up, Mr. Widdicombe. He is a graduate of the Iowa Writers’ Workshop and has received fellowships from Yaddo, Virginia Center for the Creative Arts, and the Lambda Literary Writers’ Retreat, where he was an Emerging LGBTQ Voices Fellow. He lives in New York.