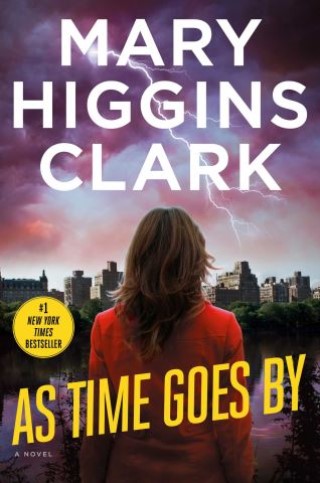 As Time Goes By

The #1 New York Times bestselling “Queen of Suspense” Mary Higgins Clark crafts a thrilling mystery in which a news reporter develops an interest in her birth parents just as she is assigned to cover the high-profile trial of a woman accused of murdering her wealthy husband.

Television journalist Delaney Wright is on the brink of stardom when she begins covering a sensational murder trial. She should be thrilled with the story of her career, but her growing desire to locate her birth mother consumes her thoughts. When Delaney’s friends Alvirah Meehan and her husband Willy offer to look into the mystery surrounding her birth, they uncover a shocking secret they do not want to reveal.

On trial for murder is Betsy Grant, widow of a wealthy doctor who has suffered from Alzheimer’s for eight years. When her once-upon-a-time celebrity lawyer urges her to accept a plea bargain, Betsy refuses: she will go to trial to prove her innocence.

Betsy’s stepson, Alan Grant, bides his time nervously as the trial begins. His substantial inheritance hangs in the balance—his only means of making good on payments he owes his ex-wife, his children, and increasingly angry creditors.

As the trial unfolds and the damning evidence against Betsy piles up, Delaney is convinced that Betsy is not guilty and frantically tries to prove her innocence. A true classic from Mary Higgins Clark, As Time Goes By is a thrilling read by “the mistress of high tension” (The New Yorker).

Mary Higgins Clark: The #1 New York Times bestselling author Mary Higgins Clark has written forty suspense novels, four collections of short stories, a his­torical novel, a memoir, and two children’s books. With bestselling author Alafair Burke she writes the Under Suspicion series including The Cinderella Murder, All Dressed in White, The Sleeping Beauty Killer, Every Breath You Take, and You Don’t Own Me. With her daughter Carol Higgins Clark, she has coauthored five more suspense novels. More than one hundred million copies of her books are in print in the United States alone. Her books are international bestsellers.