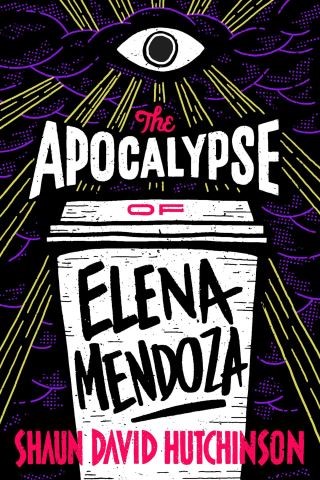 The Apocalypse of Elena Mendoza

From the critically acclaimed author of We Are the Ants and At the Edge of the Universe comes a mind-bending, riveting novel about a teen who was born to a virgin mother and realizes she has the power to heal—but that power comes at a huge cost.

Sixteen-year-old Elena Mendoza is the product of a virgin birth.

This can be scientifically explained (it’s called parthenogenesis), but what can’t be explained is how Elena is able to heal Freddie, the girl she’s had a crush on for years, from a gunshot wound in a Starbucks parking lot. Or why the boy who shot Freddie, David Combs, disappeared from the same parking lot minutes later after getting sucked up into the clouds. Other things that can’t be explained are the talking girl on the front of a tampon box, or the reasons that David Combs shot Freddie in the first place.

As more unbelievable things occur, and Elena continues to perform miracles, the only remaining explanation is the least logical of all—that the world is actually coming to an end, and Elena is possibly the only one who can do something about it.

Shaun David Hutchinson: Shaun David Hutchinson is the author of numerous books for young adults, including The Past and Other Things That Should Stay Buried, The Apocalypse of Elena Mendoza, At the Edge of the Universe, and We Are the Ants. He also edited the anthologies Violent Ends and Feral Youth and wrote the memoir Brave Face, which chronicles his struggles with depression and coming out during his teenage years. He lives in Seattle, where he enjoys drinking coffee, yelling at the TV, and eating cake. Visit him at ShaunDavidHutchinson.com or on Twitter @ShaunieDarko.