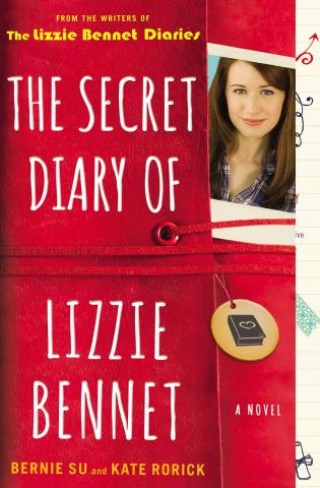 The Secret Diary of Lizzie Bennet

A modern adaptation of Jane Austen’s Pride and Prejudice based on the Emmy Award–winning YouTube series, The Lizzie Bennet Diaries.

Twenty‑four‑year‑old grad student Lizzie Bennet is saddled with student loan debt and still living at home along with her two sisters—beautiful Jane and reckless Lydia. When she records her reflections on life for her thesis project and posts them on YouTube, she has no idea The Lizzie Bennet Diaries will soon take on a life of their own, turning the Bennet sisters into internet celebrities seemingly overnight.

When rich and handsome Bing Lee comes to town, along with his stuck‑up friend William Darcy, things really start to get interesting for the Bennets—and for Lizzie’s viewers. But not everything happens on‑screen. Lucky for us, Lizzie has a secret diary.

The Secret Diary of Lizzie Bennet takes readers deep inside Lizzie’s world and well beyond the confines of her camera—from the wedding where she first meets William Darcy to the local hangout of Carter’s bar, and much more. Lizzie’s private musings are filled with revealing details about the Bennet household, including her growing suspicions about her parents’ unstable financial situation, her sister’s budding relationship with Bing Lee, the perils of her unexpected fame, and her uncertainty over her future—and whom she wants to share it with.

Featuring plenty of fresh twists to delight fans and new readers alike, The Secret Diary of Lizzie Bennet expands on the web series phenomenon that captivated a generation and reimagines the Pride and Prejudice story like never before.

Bernie Su: Bernie Su is the Emmy Award-winning executive producer, co-creator, head writer, and director of The Lizzie Bennet Diaries for which he received a Streamy Award for Best Writing, Comedy and Best Interactive Program. Su is a graduate of the University of California, San Diego, and lives in Los Angeles.Kate Rorick is a writer for The Lizzie Bennet Diaries. She has written for a variety of television shows, including Law and Order: Criminal Intent and Terra Nova. In her spare time, she is the bestselling author of historical romance novels under the name Kate Noble. Rorick is a graduate of Syracuse University and lives in Los Angeles.