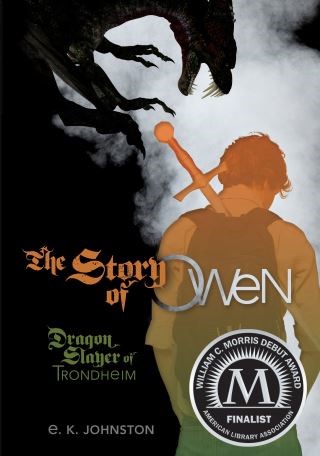 The Story of Owen

Listen! For I sing of Owen Thorskard: valiant of heart, hopeless at algebra, last in a long line of legendary dragon slayers. Though he had few years and was not built for football, he stood between the town of Trondheim and creatures that threatened its survival.

There have always been dragons. As far back as history is told, men and women have fought them, loyally defending their villages. Dragon slaying was a proud tradition.

But dragons and humans have one thing in common: an insatiable appetite for fossil fuels. From the moment Henry Ford hired his first dragon slayer, no small town was safe. Dragon slayers flocked to cities, leaving more remote areas unprotected.

Such was Trondheim's fate until Owen Thorskard arrived. At sixteen, with dragons advancing and his grades plummeting, Owen faced impossible odds—armed only with a sword, his legacy, and the classmate who agreed to be his bard.

Listen! I am Siobhan McQuaid. I alone know the story of Owen, the story that changes everything. Listen!

The cool things about Emily Kate Johnston are that she is a forensic archaeologist, she has lived on four continents, she decorates cupcakes in her spare time, she adores the Oxford comma, and she loves to make up stories.

The less cool things about Kate are that she's from a small town in southwestern Ontario, she spends a lot of time crying over books in random coffee shops, and she can't play as many musical instruments as she wishes she could. The Story of Owen is Kate's first novel. Visit her online at ekjohnston.ca.