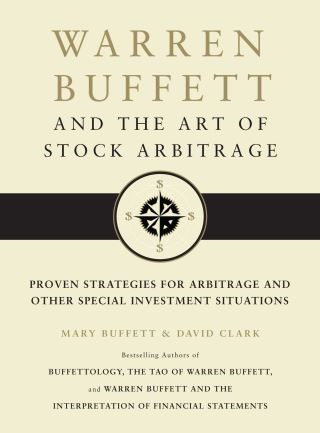 Warren Buffett and the Art of Stock Arbitrage

Proven Strategies for Arbitrage and Other Special Investment Situations

FOR THE FIRST TIME EVER, DISCOVER HOW WARREN BUFFETT HAS MADE UNHEARD-OF PROFITS IN THE WORLD OF ARBITRAGE AND SPECIAL INVESTMENTS, AND HOW TO BE A PLAYER IN THESE VENTURES.

Investors around the world recently learned that from 1980 through 2003 Warren Buffett’s arbitrage operations produced an astronomical average annualized rate of return of 81.28%. Even more amazing, this incredible rate of return was produced with very low rates of risk.

Long considered one of the most powerful and profitable of Buffett’s investment operations, but the least understood, these special types of investments have been the edge that made Warren Buffett so phenomenally successful. Warren Buffett and the Art of Stock Arbitrage is the first book to examine Buffett’s special brand of arbitrage investing.

Buffettologists Mary Buffett and David Clark explore the previously secret domain of Warren Buffett’s stock arbitrage investments. They explain how Buffett finds deals, evaluates them, picks the winners from the losers, and when he is willing to use leverage to help boost his performance in these investments to make amazing profits. Basic mathematical equations are included to help readers determine the projected rate of return, evaluate risk, and determine the probability of the deal being a success.

Buffett and Clark provide detailed explanations and examples of Warren Buffett’s methods for arbitrage, and for investing in tender offers, liquidations, spin-offs, and reorganizations. They take readers step by step from the initial public announcement to tendering shares, explaining how Buffett evaluates risk and maximizes his profit at every step.