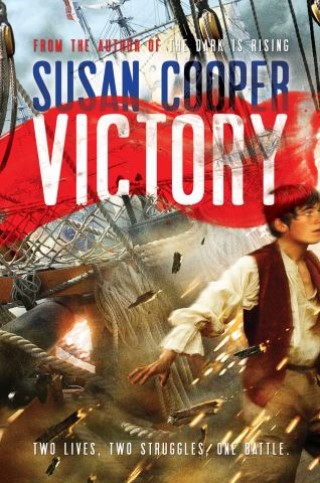 A historic connection has the power to change the future in this classic, gripping novel from Newbery Medalist Susan Cooper.

Sam Robbins is a farm boy, kidnapped to serve on HMS Victory, the ship on which Lord Nelson will die a hero’s death at the Battle of Trafalgar in 1805.

Molly Jennings is a twenty-first-century English girl who’s been transplanted to the United States by her stepfather’s job and is fighting her own battle against loss and loneliness.

Two different lives, two centuries apart, are linked by a tiny scrap of fraying cloth that’s tucked into an old book. It draws Molly into Sam’s world, to a moment in time that changed history—a frightening shared moment that holds the key both to secrets from the past and hope for the future.

Susan Cooper: Susan Cooper is one of our foremost children’s authors; her classic five-book fantasy sequence The Dark Is Rising has sold millions of copies worldwide. Her many books have won the Newbery Medal, a Newbery Honor, and the Boston Globe-Horn Book Award, and been shortlisted five times for the Carnegie Medal. She combines fantasy with history in Victory (a Washington Post Top Ten for Children novel), King of Shadows and Ghost Hawk, and her magical The Boggart and the Monster, second in a trilogy, won the Scottish Arts Council’s Children’s Book Award. Susan Cooper lives on a saltmarsh island in Massachusetts, and you can visit her online at TheLostLand.com.