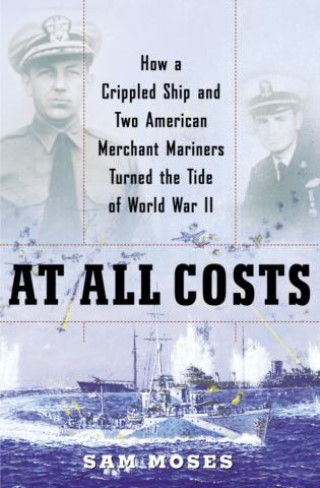 In this gripping, page-turning account, Sam Moses has told a story in the tradition of Sebastian Junger’s A Perfect Storm, Robert Kurson’s Shadow Divers, and Hampton Sides’s Ghost Soldiers. It’s a story about the heroism of two men in battle at sea during World War II, and one woman fleeing Nazi Norway with her child. It’s about how courage can change the course of history.

AT ALL COSTS: How a Crippled Ship and Two American Merchant Marines Turned the Tide of World War II is the astonishing untold account, with original historical reporting, of how two men faced unfathomable danger to help save the island of Malta, Churchill’s crux of the war.

In 1942, the tiny island of Malta was the most heavily bombed place on earth. Hitler needed Malta as a stepping-stone to get to the oil in Iraq and Iran (Persia at the time). Blockaded by sea, Malta was running on empty, in food, fuel and ammunition. Axis U-boats and dive-bombers made supply convoys to Malta more like suicide missions. In this last-hope convoy, 50 warships escorted 13 freighters carrying aviation fuel, and a single critical tanker, the SS Ohio, with 107,000 barrels of oil from Texas. Winston Churchill had traveled to Washington and asked FDR for the tanker–his prime ministership was at stake over this mission to Malta.

Relentlessly dive-bombed and repeatedly torpedoed, the Ohio suffered huge hits and was abandoned. Two young American merchant mariners– pulled from the sea after their own ship went down in flames–boarded the ravaged tanker, repaired her guns and fought off German and Italian dive-bombers, as the sinking Ohio was towed at 4 knots toward Malta with a tiny crew of volunteers.

Sam Moses’ AT ALL COSTS is a triumphant story of human bravery: fearless, selfless acts by men determined to save a ship and win a war; profound communal courage from an island under brutal siege; and leaders who understood the cause of freedom.

Sam Moses: Sam Moses is the author of the acclaimed race-driving memoir, Fast Guys, Rich Guys, and Idiots, and a former senior writer for Sports Illustrated. He began writing as a U.S. Navy Seaman on a heavy cruiser in action off Vietnam. He lives with his two sons in White Salmon, Washington.