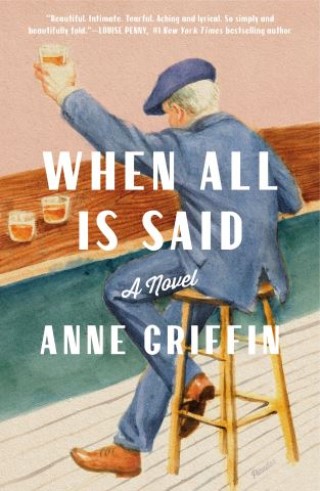 When All Is Said

THE INTERNATIONAL BESTSELLER & INDIE NEXT PICK

"Griffin's stunning debut, brimming with irresistible Irish-isms, is an elegy to love, loss and the complexity of life." –People Magazine

One of Goodreads' 43 Most Anticipated Reads of 2019

"I'm here to remember–all that I have been and all that I will never be again."

If you had to pick five people to sum up your life, who would they be? If you were to raise a glass to each of them, what would you say? And what would you learn about yourself, when all is said?

At the bar of a grand hotel in a small Irish town sits 84-year-old Maurice Hannigan. He’s alone, as usual ­- though tonight is anything but. Pull up a stool and charge your glass, because Maurice is finally ready to tell his story.

Over the course of this evening, he will raise five toasts to the five people who have meant the most to him. Through these stories - of unspoken joy and regret, a secret tragedy kept hidden, a fierce love that never found its voice - the life of one man will be powerful and poignantly laid bare.

Beautifully heart-warming and powerfully felt, the voice of Maurice Hannigan will stay with you long after all is said and done.

Anne Griffin: ANNE GRIFFIN is the winner of the John McGahern Award for Literature. Shortlisted for the Hennessey New Irish Writing Award and The Sunday Business Post Short Story Competition, Anne’s work has been featured in, amongst others, The Irish Times and The Stinging Fly, and she had an eight year career at Waterstones. Anne lives in Ireland with her husband and son. When All Is Said is her debut novel.