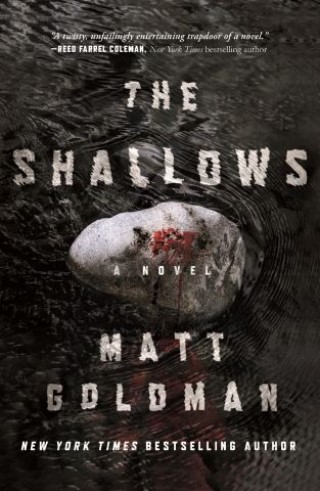 In the words of Lee Child on Gone to Dust, “I want more of Nils Shapiro.” New York Times Best Selling author and Emmy Award-winning writer Matt Goldman obliges by bringing the Minneapolis private detective back for another thrilling, stand-alone adventure in The Shallows.

A prominent lawyer is found dead, tied to his own dock by a fishing stringer through his jaw, and everyone wants private detective Nils Shapiro to protect them from suspicion: The unfaithful widow. Her artist boyfriend. The lawyer’s firm. A polarizing congressional candidate. A rudderless suburban police department. Even the FBI.

Nils and his investigative partners illuminate a sticky web of secrets and deceit that draws national attention. But finding the web doesn’t prevent Nils from getting caught in it. Just when his safety is most in peril, his personal life takes an unexpected twist, facing its own snarl of surprise and deception.

In The Shallows, Goldman delves into the threat of dark history repeating itself while delivering another page-turner with his signature pace, humor, and richly drawn characters.

Matt Goldman: New York Times bestselling author MATT GOLDMAN is a playwright and Emmy Award-winning television writer for Seinfeld, Ellen, and other shows. He brings his signature storytelling abilities and light touch to the Nils Shapiro series. Goldman's debut, Gone to Dust, has been nominated for the Shamus and Nero Awards and was a Lariat Adult Fiction Reading List selection. He lives in Minnesota with his wife, two dogs, two cats, and whichever children happen to be around.