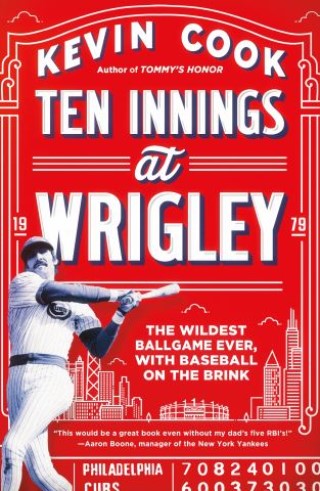 The Wildest Ballgame Ever, with Baseball on the Brink

The dramatic story of a legendary 1979 slugfest between the Chicago Cubs and the Philadelphia Phillies, full of runs, hits, and subplots, at the tipping point of a new era in baseball history

It was a Thursday at Chicago’s Wrigley Field, mostly sunny with the wind blowing out. Nobody expected an afternoon game between the Philadelphia Phillies and Chicago Cubs on May 17, 1979, to be much more than a lazy early-season contest matching two teams heading in opposite directions—the first-place Phillies and the Cubs, those lovable losers—until they combined for thirteen runs in the first inning. “The craziest game ever,” one player called it. “And then the second inning started.”

Ten Innings at Wrigley is Kevin Cook’s vivid account of a game that could only have happened at this ballpark, in this era, with this colorful cast of heroes and heels: Hall of Famers Mike Schmidt and Bruce Sutter, surly slugger Dave Kingman, hustler Pete Rose, unlucky Bill Buckner, scarred Vietnam vet Garry Maddox, troubled relief pitcher Donnie Moore, clubhouse jester Tug McGraw, and two managers pulling out what was left of their hair.

It was the highest-scoring ballgame in a century, and much more than that. Bringing to life the run-up and aftermath of a contest The New York Times called “the wildest in modern history,” Cook reveals the human stories behind the game—and how money, muscles and modern statistics were about to change baseball forever.

Kevin Cook: Kevin Cook is the author of Electric October and five other books on sports and the people who play them, including Tommy’s Honor and The Dad Report. He is a former senior editor at Sports Illustrated who has written for The New York Times, Men’s Journal, GQ, Playboy, Smithsonian, and many other publications. He has appeared on CNN, ESPN, and Fox TV. An Indiana native, he now lives in Northampton, Massachusetts.