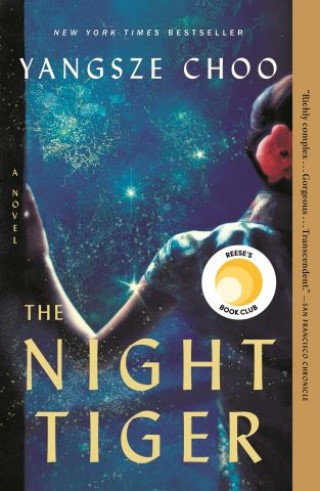 “A sumptuous garden maze of a novel that immerses readers in a complex, vanished world.” —Kirkus (starred review)

Quick-witted, ambitious Ji Lin is stuck as an apprentice dressmaker, moonlighting as a dancehall girl to help pay off her mother’s Mahjong debts. But when one of her dance partners accidentally leaves behind a gruesome souvenir, Ji Lin may finally get the adventure she has been longing for.

Eleven-year-old houseboy Ren is also on a mission, racing to fulfill his former master’s dying wish: that Ren find the man’s finger, lost years ago in an accident, and bury it with his body. Ren has 49 days to do so, or his master’s soul will wander the earth forever.

As the days tick relentlessly by, a series of unexplained deaths racks the district, along with whispers of men who turn into tigers. Ji Lin and Ren’s increasingly dangerous paths crisscross through lush plantations, hospital storage rooms, and ghostly dreamscapes.

Yangsze Choo's The Night Tiger pulls us into a world of servants and masters, age-old superstition and modern idealism, sibling rivalry and forbidden love. But anchoring this dazzling, propulsive novel is the intimate coming-of-age of a child and a young woman, each searching for their place in a society that would rather they stay invisible.

"A work of incredible beauty... Astoundingly captivating and striking... A transcendent story of courage and connection." —Booklist (starred review)

Yangsze Choo: Yangsze Choo is a Malaysian writer of Chinese descent. After receiving her undergraduate degree from Harvard, she worked as a management consultant before writing her New York Times bestselling debut novel. The Ghost Bride, now a Netflix Original series. She lives in California with her family and several chickens, and loves to eat and read (often at the same time). The Night Tiger would not have been possible without large quantities of dark chocolate.