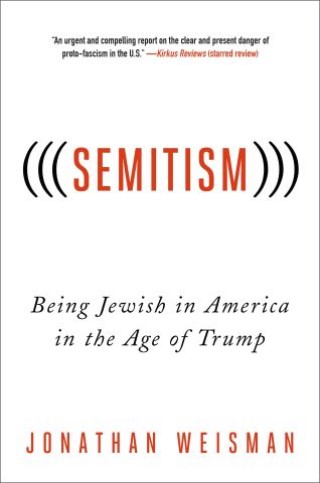 (((Semitism))): Being Jewish in America in the Age of Trump

In the wake of Donald Trump's election and the Pittsburgh synagogue massacre, (((Semitism))) is a powerful book that examines how we can fight anti-Semitism in America

Jewish Book Council: "Could not be more important or timely."

Bernard-Henri Lévy: "It would be wonderful if anti-Semitism was a European specialty and stopped at the border with the United States. Alas, this is not the case. Jonathan Weisman’s new book (((Semitism))) shows why..."

Michael Eric Dyson: "With eloquence and poignancy Weisman shows how hatred can slowly and quietly chew away at the moral fabric of society. We now live in an age where more than ever bigotry and oppression no longer need to hide in fear of reproach. The floodgates have opened. This is much more than a personal response to the bigotry he experienced because of his Jewishness; Weisman has written a manifesto that outlines the dangers of marginalizing and demonizing all minority groups. This powerful book is for all of us."

Anti-Semitism has always been present in American culture, but with the rise of the Alt Right and an uptick of threats to Jewish communities since Trump took office, including the the Pittsburgh synagogue massacre, New York Times editor Jonathan Weisman has produced a book that could not be more important or timely. When Weisman was attacked on Twitter by a wave of neo-Nazis and anti-Semites, witnessing tropes such as the Jew as a leftist anarchist; as a rapacious, Wall Street profiteer; and as a money-bags financier orchestrating war for Israel, he stopped to wonder: How has the Jewish experience changed, especially under a leader like Donald Trump?

In (((Semitism))), Weisman explores the disconnect between his own sense of Jewish identity and the expectations of his detractors and supporters. He delves into the rise of the Alt Right, their roots in older anti-Semitic organizations, the odd ancientness of their grievances—cloaked as they are in contemporary, techy hipsterism—and their aims—to spread hate in a palatable way through a political structure that has so suddenly become tolerant of their views.

He concludes with what we should do next, realizing that vicious as it is, anti-Semitism must be seen through the lens of more pressing threats. He proposes a unification of American Judaism around the defense of self and of others even more vulnerable: the undocumented immigrants, refugees, Muslim Americans, and black activists who have been directly targeted, not just by the tolerated Alt Right, but by the Trump White House itself.

Jonathan Weisman: JONATHAN WEISMAN is Deputy Washington Editor of The New York Times and author of the novel, No. 4 Imperial Lane, which was a Chautauqua Prize finalist, Amazon Best Book of the Month, and Great Group Reads Pick at the Women’s National Book Association. He has reported for The Baltimore Sun, The Washington Post, USA Today, The Wall Street Journal, and others. He is the father of two teenage daughters, and lives with fellow writer Jennifer Steinhauer in Washington, D.C.