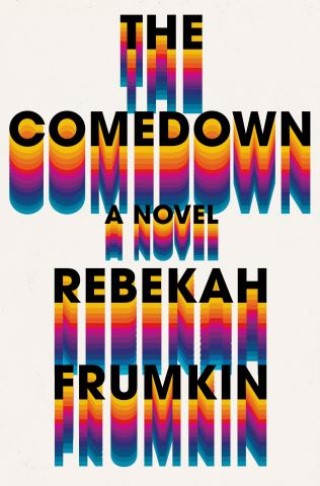 A dazzling epic that follows two very different families in Cleveland across generations, beginning with their patriarchs, who become irrevocably intertwined one fateful night

A blistering dark comedy, Rebekah Frumkin's The Comedown is a romp across America, from the Kent State shootings to protest marches in Chicago to the Florida Everglades, that explores delineating lines of race, class, religion, and time.

Scrappy, street smart drug dealer Reggie Marshall has never liked the simpering addict Leland Bloom-Mittwoch, which doesn’t stop Leland from looking up to Reggie with puppy-esque devotion. But when a drug deal goes dramatically, tragically wrong and a suitcase (which may or may not contain a quarter of a million dollars) disappears, the two men and their families become hopelessly entangled. It’s a mistake that sets in motion a series of events that are odd, captivating, suspenseful, and ultimately inevitable.

Both incendiary and earnest, The Comedown steadfastly catalogs the tangled messes the characters make of their lives, never losing sight of the beauty and power of each family member’s capacity for love, be it for money, drugs, or each other.

Rebekah Frumkin: Rebekah Frumkin's fiction and essays have appeared in Granta, McSweeney's, and Best American Nonrequired Reading, among other places. She holds an MFA from the Iowa Writers' Workshop and was the 2014 recipient of the Richard E. Guthrie Memorial Fellowship. She is currently getting her MSJ from the Medill School of Journalism at Northwestern University. The Comedown is her first novel.