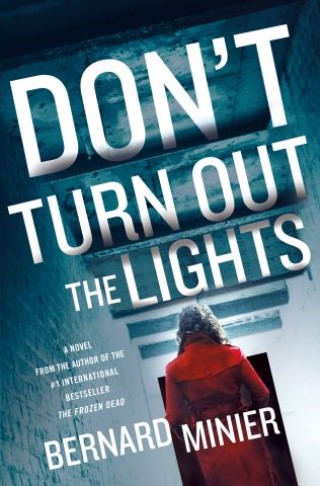 Don't Turn Out the Lights

Christine Steinmeyer thought the anonymous suicide note she found in her mailbox on Christmas Eve wasn’t meant for her. But the man calling in to her radio show seems convinced otherwise.

That’s only the beginning. Bit by bit, her life is turned upside down. But who among her friends and family hates her enough to want to destroy her? And why?It’s as if someone has taken over her life, and everything holding it together starts to crumble. Soon all that is left is an unimaginable nightmare.
Martin Servaz is on leave in a clinic for depressed cops, haunted by his childhood sweetheart Marianne’s kidnapping by his nemesis, the psychopath Julian Hirtmann. One day, he receives a key card to a hotel room in the mail—the room where an artist committed suicide a year earlier. Someone wants him to get back to work, which he’s more than ready to do, despite his mandatory sick leave. Servaz soon uncovers evidence of a truly terrifying crime. Could someone really be cruelly, consciously hounding women to death?

What if the people closest to us are not what they seem? What happens when someone takes control of your life and your relationships? And what is hiding in the darkness? In Bernard Minier's Don't Turn Out the Lights, you won’t see who’s coming after you.

Bernard Minier: BERNARD MINIER grew up in the foothills of the French Pyrenees. He had a career as a customs official before publishing his first novel, The Frozen Dead. The novel has been translated into a dozen languages and has garnered critical acclaim, as well as several literary prizes in France. Minier is also the author of The Circle and lives in the Essonne, south of Paris.