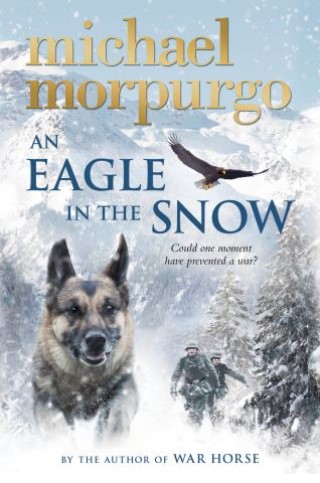 An Eagle in the Snow

England, 1940. Barney’s home has been destroyed by bombing, and he and his mother are traveling to the countryside when German planes attack. Their train is forced to take shelter in a tunnel and there, in the darkness, a stranger— a fellow passenger—begins to tell them a story about two young soldiers who came face to face in the previous war. One British, one German. Both lived, but the British soldier was haunted by the encounter once he realized who the German was: the young Adolf Hitler.

The British soldier made a moral decision. Was it the right one? Readers can ponder that difficult question for themselves with Michael Morpurgo's latest middle-grade novel An Eagle in the Snow.

Michael Morpurgo: Michael Morpurgo, a Member of the Order of the British Empire, is the author of more than 100 books, including An Elephant in the Garden, Shadow, A Medal for Leroy, and Listen to the Moon. He is also the author of the New York Times-bestseller War Horse, which was adapted for the stage and became a film by Steven Spielberg.