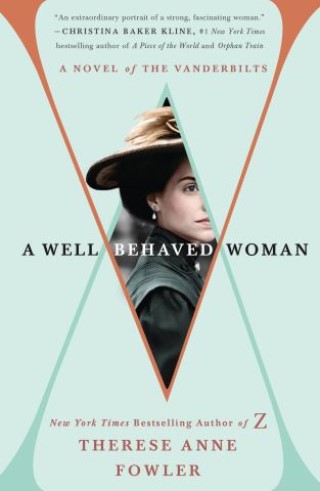 A Novel of the Vanderbilts

The riveting novel of iron-willed Alva Vanderbilt and her illustrious family as they rule Gilded-Age New York, written by Therese Anne Fowler, a New York Times bestselling author of Z: A Novel of Zelda Fitzgerald.

Alva Smith, her southern family destitute after the Civil War, married into one of America’s great Gilded Age dynasties: the newly wealthy but socially shunned Vanderbilts. Ignored by New York’s old-money circles and determined to win respect, she designed and built nine mansions, hosted grand balls, and arranged for her daughter to marry a duke. But Alva also defied convention for women of her time, asserting power within her marriage and becoming a leader in the women's suffrage movement.

With a nod to Jane Austen and Edith Wharton, in A Well-Behaved Woman Therese Anne Fowler paints a glittering world of enormous wealth contrasted against desperate poverty, of social ambition and social scorn, of friendship and betrayal, and an unforgettable story of a remarkable woman. Meet Alva Smith Vanderbilt Belmont, living proof that history is made by those who know the rules—and how to break them.

Therese Anne Fowler: THERESE ANNE FOWLER is the author of the New York Times bestselling novel Z: A Novel of Zelda Fitzgerald. Raised in the Midwest, she moved to North Carolina in 1995. She holds a BA in sociology/cultural anthropology and an MFA in creative writing from North Carolina State University.