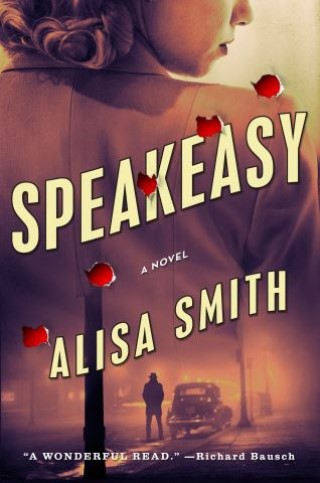 In this literate and action-packed historical thriller, set during World War II, a plucky code-breaker fights to keep a deadly secret as her Bonnie-and-Clyde past threatens to catch up with her.

Thirty-year-old Lena Stillman is living a perfectly respectable life when a shocking newspaper headline calls up her past: it concerns her former lover, charismatic bank robber Bill Bagley. A romantic and charming figure, Lena had tried to forget him by resuming her linguistic studies, which led to her recruitment as a Navy code-breaker intercepting Japanese messages during World War II.

But can Lena keep her own secrets? Threatening notes and the appearance of an old diary that recalls her gangster days are poised to upset her new life.

Whom can she really trust? Is there a spy among the code-breakers? And who is it that wants her dead?

“Alisa Smith’s novel Speakeasy, set in the thirties and forties, is written with great authority. A wonderful read, and very convincing.” —Richard Bausch, author of Something Is Out There and Peace

Alisa Smith: ALISA SMITH is the bestselling co-author of Plenty: A Year of Eating Locally on the 100-Mile Diet (Crown). Her freelance writing has been published in Outside, Reader’s Digest, Utne Reader, Ms. Magazine, Canadian Geographic, Elle Canada, the National Post, and many others, winning two National Magazine Awards. She served as a judge for a various literary awards and has lectured widely on writing. She is based in Vancouver where she is now hard at work on the sequel to Speakeasy.