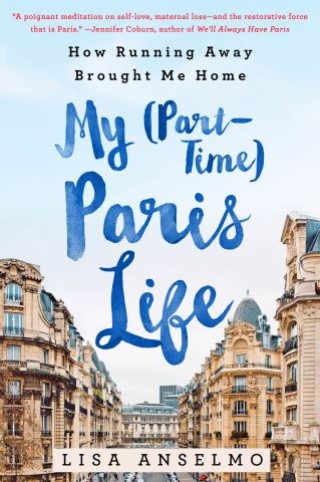 How Running Away Brought Me Home

Poignant, touching, and lively, this memoir of a woman who loses her mother and creates a new life for herself in Paris will speak to anyone who has lost a parent or reinvented themselves. Lisa Anselmo wrapped her entire life around her mother, a strong woman who was a defining force in her daughter’s life—maybe too defining. When her mother dies from breast cancer, Lisa realizes she hadn’t built a life of her own, and struggles to find her purpose. Who is she without her mother—and her mother’s expectations?

Desperate for answers, she reaches for a lifeline in the form of an apartment in Paris, refusing to play it safe for the first time. What starts out as a lurching act of survival sets Lisa on a course that reshapes her life in ways she never could have imagined. But how can you imagine a life bigger than anything you’ve ever known?

In the vein of Eat, Pray, Love and Wild, My (Part-time) Paris Life a story is for anyone who’s ever felt lost or hopeless, but still holds out hope of something more. This candid memoir explores one woman’s search for peace and meaning, and how the ups and downs of expat life in Paris taught her to let go of fear, find self-worth, and create real, lasting happiness.

Lisa Anselmo: LISA ANSELMO spent most of her professional career in magazine publishing. Anselmo worked on the launch ofAllure, the re-launch of Details with James Truman, and the redesign of the New Yorker for Tina Brown at Condé Nast. In 2007, she joined Time Inc., where she headed creative for a group of iconic magazines such as InStyleand People. Anselmo started traveling to Paris regularly over ten years ago, and eventually built another life across the ocean.