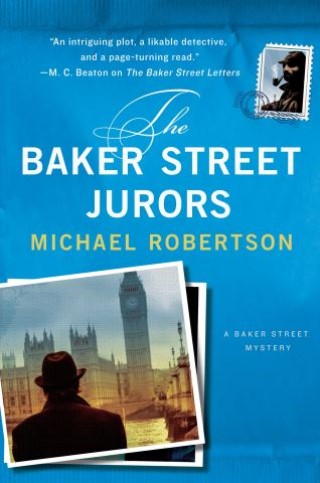 Michael Robertson has delighted mystery readers and Sherlock Holmes aficionados everywhere with his charming and innovative Baker Street mystery series, where brothers Reggie and Nigel Heath are charged with answering letters to Sherlock that arrive at their law office, located at 221B Baker Street.

Everyone must do jury duty. Even Sherlock Holmes.

A nation’s greatest sports hero has been accused of murder. The trial is approaching, and the public is clamoring—both for and against. And in a desperate, computer-generated quest to fill its quota of jurors, the Crown Court has included on its summons list the known occupants—real and otherwise—of 221B Baker Street. One summons is addressed to Sherlock Holmes; it doesn’t matter to the Crown Court Jury Selection Service whether Holmes is real or fictional, or in which century he existed.

The other is addressed to Mr. Nigel Heath—who is living and sleeping on the couch in his office at Baker Street Chambers. With Nigel in the jury selection pool are a lovely young woman with a mysterious tattoo, an elderly widow with piercing blue eyes and a mind like a tack, a slick millennial whose occupation is cornering the market on prescription drugs, and a tall man with an aquiline nose who seems reluctant to say exactly how he received his jury summons.

Before the trial is done, Nigel and each of his fellow prospective jurors will wonder not only which of them will be impaneled—and what verdict they will reach—but also who will survive to render it.

Michael Robertson: MICHAEL ROBERTSON works for a large company with branches in the United States and England. He lives in San Clemente, California.