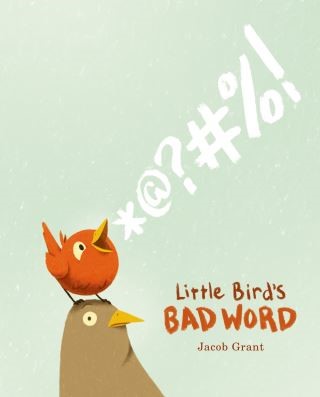 Little Bird learned a new word! He loves it so much that he's bursting to share it with all of his friends.

The only problem is, this isn't a very nice word. Little Bird doesn't realize it, but this word might even hurt someone's feelings. With the help of Papa Bird, maybe Little Bird will learn another new word--one that will make things all better.

Jacob Grant: Jacob Grant is originally from Ohio, but now lives with his wife in a very windy city in Illinois. Day and night he can be found in his home studio drawing, painting, and writing until something feels story-ish. His debut picture book, Scaredy Kate, was released in 2014. Jacob tries not to use bad words around any little animals.