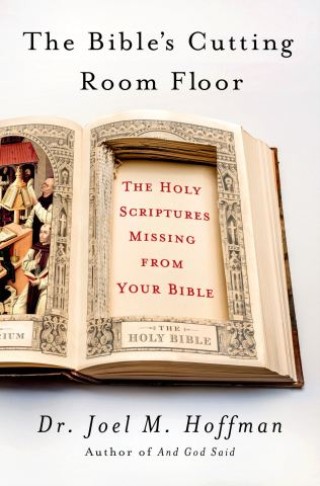 The Holy Scriptures Missing from Your Bible

The Bible you usually read is not the complete story. Some holy writings were left out for political or theological reasons, others simply because of the physical restrictions of ancient bookmaking technology. At times, the compilers of the Bible skipped information that they assumed everyone knew. Some passages were even omitted by accident.

In The Bible's Cutting Room Floor, acclaimed author and translator Dr. Joel M. Hoffman gives us the stories and other texts that didn't make it into the Bible even though they offer penetrating insight into the Bible and its teachings.

The Book of Genesis tells us about Adam and Eve's time in the Garden of Eden, but not their saga after they get kicked out or the lessons they have for us about good and evil. The Bible introduces us to Abraham, but it doesn't include the troubling story of his early life, which explains how he came to reject idolatry to become the father of monotheism. And while there are only 150 Psalms in today's Bible, there used to be many more.

Dr. Hoffman deftly brings these and other ancient scriptural texts to life, exploring how they offer new answers to some of the most fundamental and universal questions people ask about their lives. An impressive blend of history, linguistics, and religious scholarship, The Bible's Cutting Room Floor reveals what's missing from your Bible, who left it out, and why it is so important.

Dr. Joel M. Hoffman: JOEL M. HOFFMAN, Ph.D., is the author of In the Beginning and And God Said. He is the chief translator for the series My People's Prayer Book (winner of the National Jewish Book Award) and for My People's Passover Haggadah. He is an occasional contributor to The Jerusalem Post and The Huffington Post and has held faculty appointments at Brandeis University and at Hebrew Union College—Jewish Institute of Religion. He lives in New York.