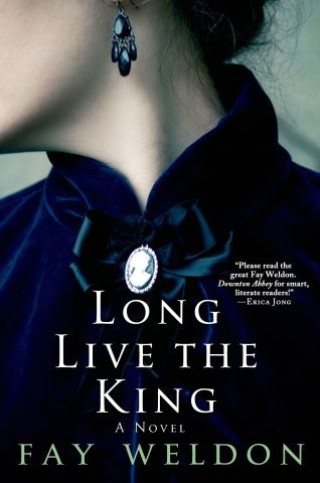 From the award-winning writer of the original Upstairs Downstairs—the second novel in an irresistible trilogy about an Earl's family and his servants at the turn of the twentieth century.

As 1901 comes to an end, there is much to be grateful for: The Dilberne fortune has been restored, and the grand Dilberne Court, with its one hundred rooms, has been saved. Lord Robert's son, Arthur, is happily married to Chicago heiress, Minnie, who is pregnant and trying to come to terms with her new role as lady of the manor, and her charming but controlling mother-in-law, Lady Isobel. As Lord Robert and Lady Isobel get caught up in the preparations of the coronation of Edward VII, they debate the future of their recently orphaned niece, Adela. Isobel and Minnie want to take her in; Robert and Arthur do not. While they argue, Adela runs away and joins a travelling group of spiritualists and has a life-saving run-in with the king.
With Long Live the King, Fay Weldon continues the magnificent trilogy that began with Habits of the House. As the award-winning writer for the pilot episode of the original Upstairs Downstairs, Weldon brings her deservedly famous wit and insight to this novel of love and desire, morals and manners.

Fay Weldon: FAY WELDON is a novelist, playwright, and screenwriter who, at the age of 16, lived in a grand London townhouse as the daughter of the housekeeper. In addition to winning a Writers' Guild Award for the pilot of Upstairs Downstairs, she is a Commander of the British Empire whose books include Praxis, shortlisted for the Booker Prize for Fiction; The Heart of the Country, winner of the Los Angeles Times Fiction Prize; Worst Fears, shortlisted for the Whitbread Novel Award; and Wicked Women, which won the PEN/Macmillan Silver Pen Award. She lives in England.