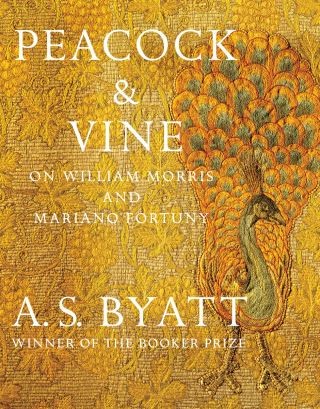 On William Morris and Mariano Fortuny

From the winner of the Booker Prize: A ravishing book that opens a window into the lives, designs, and passions of Mariano Fortuny and William Morris, two remarkable artists who themselves are passions of the writer A. S. Byatt.

Born a generation apart in the mid-1800s, Fortuny and Morris were seeming opposites: Fortuny a Spanish aristocrat thrilled by the sun-baked cultures of Crete and Knossos; Morris a member of the British bourgeoisie, enthralled by Nordic myths. Through their revolutionary inventions and textiles, both men inspired a new variety of art that is as striking today as when it was first conceived. In this elegant meditation, Byatt traces their genius right to the source.

Fortuny’s Palazzo Pesaro Orfei in Venice is a warren of dark spaces imbued with the rich hues of Asia. In his attic workshop, Fortuny created intricate designs from glowing silks and velvets; in the palazzo he found “happiness in a glittering cavern” alongside the French model who became his wife and collaborator, including on the famous “Delphos” dress—a flowing, pleated gown that evoked the era of classical Greece.

Morris’s Red House outside London, with its Gothic turrets and secret gardens, helped inspire his stunning floral and geometric patterns; it likewise represented a coming together of life and art. But it was a “sweet simple old place” called Kelmscott Manor in the countryside that he loved best—even when it became the setting for his wife’s love affair with the artist Dante Gabriel Rossetti.

Generously illustrated with the artists’ beautiful designs—pomegranates and acanthus, peacock and vine—among other aspects of their worlds, this marvel-filled book brings the visions and ideas of Fortuny and Morris to vivid life.

A. S. Byatt: A. S. BYATT is the author of numerous novels, including The Children’s Book, The Biographer’s Tale, and Possession, which was awarded the Booker Prize. She has also written two novellas, published together as Angels & Insects, five collections of short stories, and several works of nonfiction. A distinguished critic and author, and the recipient of the 2016 Erasmus Prize for her “inspiring contribution to ‘life writing,’” she lives in London.