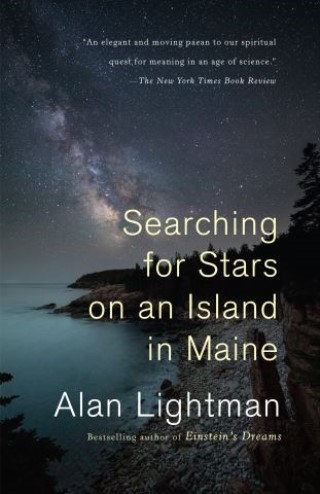 Searching for Stars on an Island in Maine

From the acclaimed author of Einstein's Dreams, here is an inspires, lyrical meditation on religion and science that explores the tension between our yearning for permanence and certainty, and the modern scientific discoveries that demonstrate the impermanent and uncertain nature of the world.

As a physicist, Alan Lightman has always held a scientific view of the world. As a teenager experimenting in his own laboratory, he was impressed by the logic and materiality of a universe governed by a small number of disembodied forces and laws that decree all things in the world are material and impermanent. But one summer evening, while looking at the stars from a small boat at sea, Lightman was overcome by the overwhelming sensation that he was merging with something larger than himself—a grand and eternal unity, a hint of something absolute and immaterial. Searching for Stars on an Island in Maine is Lightman's exploration of these seemingly contradictory impulses. He draws on sources ranging from Saint Augustine's conception of absolute truth to Einstein's theory of relativity, from the unity of the once-indivisible atom to the multiplicity of subatomic particles and the recent notion of multiple universes. What he gives us is a profound inquiry into the human desire for truth and meaning, and a journey along the different paths of religion and science that become part of that quest.

Alan Lightman: ALAN LIGHTMAN—who worked for many years as a theoretical physicist—is the author of six novels, including the international best seller Einstein's Dreams, as well as The Diagnosis, a finalist for the National Book Award. He is also the author of a memoir, three collections of essays, and several books on science. His work has appeared in The Atlantic, Granta, Harper's Magazine, The New Yorker, The New York Review of Books, Salon, and Nature, among other publications. He has taught at Harvard and at MIT, where he was the first person to receive a dual faculty appointment in science and the humanities. He is currently professor of the practice of the humanities at MIT. He lives in the Boston area.