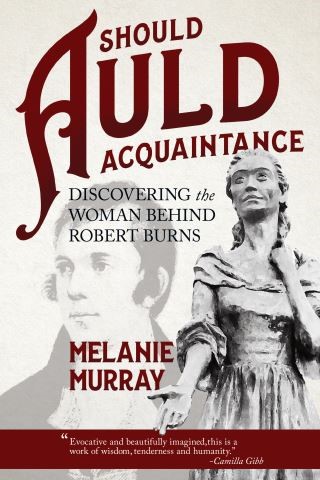 Discovering the Woman Behind Robert Burns

Robert Burns' "Belle of Mauchline? is given a voice in this lyrical and intimate depiction of the life of Jean Armour, known simply as the wife of the infamous poet and mother of nine of his children. Melanie Murray's biographical Should Auld Acquaintance reveals the historical tale of the talented farmer, a forbidden affair, and the tumultuous life of an 18th-century Scottish woman. In Should Auld Acquaintance, Jean Armour comes to life and asserts her place as more than a footnote in poetic history. Without Armour, an educated young beauty and talented singer, as his partner and muse, Burns may never have achieved his prolific collection of songs. Murray traces the footsteps of Armour and Burns through the village of Mauchline, where they met and married, to their failed farm in Ellisland and their final home in Dumfries, attempting to discover the woman who inspired the timeless poetry that brought the lyrical Scottish dialect to the English world. More than a housewife in the shadow of her talented husband, Armour is portrayed as a resilient and passionate woman who must overcome the abandonment of her family, the loss of her children, and the instability of her philandering husband. It's impossible to ignore her significance as a figure in the literary realm and to not be swept up in the complex and intricate history woven from the poems, letters and stories of Robbie Burns and his "Bonie Jean.?

Melanie Murray: Melanie Murray is a professor of literature, composition and creative writing at Okanagan College in Kelowna, BC. She holds a BA, BEd and MA in English, and a Graduate Certificate in Creative Writing. Her previous book For Your Tomorrow: The Way of an Unlikely Soldier was published by Random House in 2011.